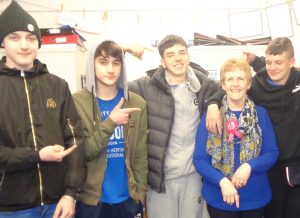 Black Country Wheels School evolved from, “The Wheels Project”, the instigator, founder member and leader, Jan Lear, started this project in 1999. Jan listened to the needs of the young people she worked with and presented them with a learning platform that they were interested in, engaging them in life skills and improving their chances of future employment.
Setting up her own organisation in 2002 to operate the project two nights per week in her own time, “Education” became a successful by-product of her social work and this caught the eye of local authorities. Black Country Wheels Project was formed in 2003.

As the project became more widely known, numbers grew and local authorities and agencies began to refer students to “Wheels” for Alternative Provision places. Various premises were used over a period of time but central to the success of Black Country Wheels was the support of the landlord of the current premises, used for many years by Jan, on The Gainsborough Industrial Trading Estate.
In 2011, to fulfil statutory legislation, Black Country Wheels became an Independent School in order to allow the work to continue with some of the most vulnerable young people in the local community who have been permanently excluded from mainstream education, or who are at risk of the same.

Today we are guided by our School Ethos

The ethos of the school is to provide each young person with a positive experience of education within a curriculum framework that is based on nurturing individual talents and providing opportunities for personal development. This enables students to be self-aware and to learn the skills that will help them manage their work, their lives and their relationships in the future.
Central to this is the school’s aim to actively promote fundamental British values and inclusion, supported by social, educational and vocational networks. The school is committed to safeguarding young people in its care and all staff share this responsibility equally.

Central to every aspect of learning is showing respect to fundamental British values and the role of the individual to make a positive contribution to their community for the benefit of themselves and their families.

We offer parents and carers a simple service to keep them up to date with any important information, to sign up for these services please fill out the form below and after some safeguarding checks you will be added to the service